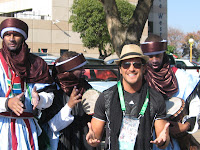 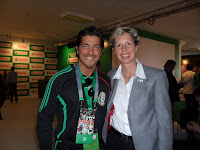 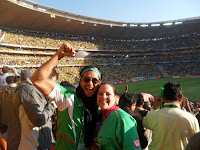 As part of his stay in Johannesburg, Paulo attended the Castrol Performance Lab, an experiential football nerve centre that immerses guests in the core Castrol brand proposition. Castrol and BP local and international guests were hosted prior to Confederations Cup Matches at six events at the Urban Tree Venue in Kramerville, Sandton, where well-trained game managers and hostesses to ensure guests fully experienced the high-tech centre.
Paulo entered the units up to three hours before match kick off, moving freely around the Lab where he participated in a range of challenging football games which enable him to pit his skills against leading footballers, including Batak, Mindball and Dribble Challenge. Building on the proposition of performance, he was able to learn and test his own game in a variety of activities throughout the unit.

Another part of his trip to South Africa, Paulo was one of many Castrol guests to also experience a Safari in Pilanesberb, South Africa. Paulo also enjoyed firsthand the passion Castrol has for futbol at the Inaugural game of the 2010 FIFA World Cup match of Mexico vs. South Africa. Paulo who is Mexican was filled with emotion as his national team tied 1 to 1.

"Castrol is a well-known brand and I am honored to have been considered to be a guest at such an amazing experience, one I will never forget. I was truly impressed by the way Castrol made relevance to their products in correlation with futbol." Said Paulo Quevedo


For more information visit www.castrolfutbol.com
Posted by Aïda Phillips Public Relations at 6:05 AM No comments:

Since 1953, the AP Stylebook has been guiding journalists (and arguably public relations professions) to write in a cohesive manner and to ensure consistency throughout all the little nuances of journalistic prose.

Fast forward to 2010 and the AP Stylebook looks drastically different than it did in 1953 and even 1983.

Today, the "journalism bible" wrote another chapter in it's history as it added new social media guidelines, including the official change from “Web site” to “website” and 41 other definitions, use cases and rules that journalists should follow.

Other notable changes include separating out “smart phone” as two words, hyphenating “e-reader,” and allowing fan, friend and follow to be used both as nouns and verbs.

Additionally, the AP defined some acronyms that are commonly used in texting and instant messaging, including ROFL (rolling on floor laughing), BRB (be right back) and G2G (good to go) one actually was new to me: POS (parents over shoulder).

Other terms include “trending,” “retweet” and “unfriend” (“defriend” is also acceptable, though the AP concludes it’s less used).

The AP also offers some basic rules for how social media should and shouldn’t be used by journalists. In those rules, there's a focus on making sure reporters continue to confirm sources and information they find on blogs, tweets and other forms of social media.

The full 2010 AP Stylebook is available on the AP’s website.